A Crush On Fandom

I didn’t know you existed. Not really.

I’ve caught glimpses of you my entire life. You looked different each time, but still familiar. You were kindred.

I first recognized you on the playground. Swinging, I pretended to fly on fairy wings and saw you use the slide as a rocket launcher. In kindergarten, you came dressed as an alien dragon with tinfoil tail and pasta strainer on your head. You were humming the Star Wars theme. I would see you in third grade homeroom, doodling superhero self-portraits, and I always secretly wished you would draw me beside you, in a purple cape and silver boots.

When I was ten and saved up pocket change to run down the block to the used book store, you were there across the piles of Le Guin and Brooks. You’d usually make room for me on the floor of the neighborhood library as we sat side-by-side without touching, looking through the newest McCaffery and Heinlein, Pratchett and Cherryh. On rare occasions, we made eye contact, but usually our gazes stayed on the page, too shy to smile.

In junior high when the kids were cruel, I knew you must be out there, but I didn’t see you. I began to write because I had no one else to talk to.

In high school, I drifted away a little, pre-occupied with honors classes and yearbook duties, but I thought we exchanged a knowing glance as the class discussed Bradbury and Yeats. I definitely heard your voice carried on the Aquanet air talking about V and The Next Generation. I strained to hear you over the Talking Heads. I wish I had looked for you then.

Undergrad introduced me to “magic realism,” I didn’t recognize you as we chatted over chai about Morrison and Allende, but you reminded me how much I loved to be surprised and enchanted in otherworldly ways.

It was love at first sight when you showed me your Tolkien and handed me my first Sandman. Afterwards you introduced me to Stars Our Destination on Clarke, and arms aching with books, my world broke open. My heart broke open, and I remembered the magic of those stories and the joy I felt in writing. I decided not to become a lawyer, but a writer.

In graduate school, I tried to learn craft and looked for you in discussions about Joyce. I found you cradling Faulkner, and I respected you when you talked about the mythology of Marquez, the allegory of Rushdie, and the re-visioning of Angela Carter.

I never knew I’d find you at a drumming circle or in the Goth bar, but there you were, and we discussed Gaiman and Straub, Wolfe and George R.R. Martin. We waxed philosophical about Babylon 5 and Deep Space 9, X-Men and Star Trek Nemesis. We became friends. We cheered while watching BSG. We discussed Stevenson, Sedia, and Scalzi. We rallied around the return of The Doctor. We waited patiently (mostly) for A Dance With Dragons. We remembered Clarke, McCaffrey, Bradbury, Sendak, and too many others who've died. We became family.

My first book was published, and you read it. I could not believe it became an Amazon bestseller in Winter 2011, and I knew you were among the readers because I recognized your reviews; you praised the mythology, dreams, and “fantastic” elements. You liked the magic I put into it.  It reached the Top 10.

When I worked with the Chicago Literary Hall of Fame to create the Fuller Awards, I knew it had to be Gene Wolfe who was honored first. I invited beloved writers and editors who also adored Gene’s writing, and they came. You came. I had never seen so many of you in one place.

Then there was Chicon 7.

It was my first Worldcon ever and my first real Con. I had been to Academic conferences and literary expos, but they are a different animal altogether because you are not always there, not so many of you in one place.

So many of us in one place.

I came to Chicon 7 to sell and sign my book and debut the first chapter of our graphic novel. I stood behind the table in the Dealers Room for five days and watched as people passed by.  You were there: alien dragon and rocketman, Superwoman and Sandman, Vulcan and Hobbit. You held hands, or walked quietly alone. Sometimes you stopped to talk, other times you nodded and kept walking. You wore Whovian scarves and steampunk goggles, and we nodded with recognition. You signed books and prints. You discussed the naming of characters and the qualities of villainesses. You paraded in costumes and received awards with grace and joy. You made me proud to be a part of it all.

I never knew it could be like that—so many creators and lovers of science fiction and fantasy in one place. I never knew you had been doing this for 70 years. 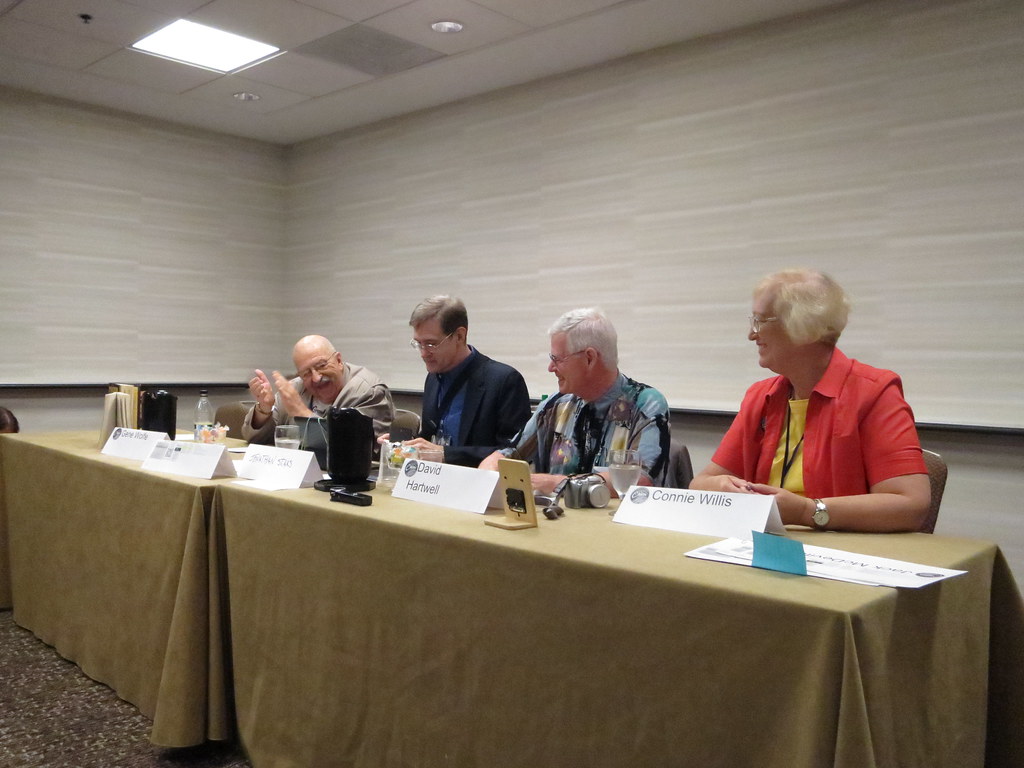 Learning to Be Dangerous Panel. Photo by Jonathan Crowe.

After one panel, when you discussed how some writers try to dodge the “ghetto” of Science Fiction and Fantasy, I wanted to rush home and finish my next novel because I want in. I’m not trying to dodge anything. Quite the opposite, I wish to be a part of that continuum, those brilliant imaginative storytellers and the people who adore what is created.

The beauty of what I saw, the magic of fandom, is that fans don’t just close a book and put it on the shelf. Fans engage the text. Whether it’s a comic, novel, or film, they continue the conversation. This allows the stories to have a special type of longevity, and it creates a community that cares enough about those ideas, characters, places, and philosophies to want to create panels, plays, costumes, zines, awards, and more.

The beauty is in that co-creation and conversation. What author, what artist, would not wish to be a part of that?

I love so many of the stories and the authors who create them. In recent years, some of them have become friends, and their friendship is a treasure, but this week I have a crush on fandom. Or would that be a Con-crush? I don’t know the lingo, the Con history and traditions. When I wasn’t behind the Wolfsword Press table, I felt a bit lost. It seemed that everyone else knew where to go and what to expect, but I’ll learn because even though Chicon 7 was exhausting and exhilarating, what I experienced broke me open again in the best possible way.

A new friend from this Worldcon weekend is writer and editor Stephen H. Segal, who gave me a copy of his book Geek Wisdom: The Sacred Teachings of Nerd Culture on the last day of the Con. It was the perfect gift to end the weekend, and I’d like to quote from his introduction:

"Hence Geek Wisdom: the first compendium of sacred teachings from the wide-ranging “holy scriptures” of geekdom, that weird mass of pop culture and high art ranging from blockbuster movies to esoteric novels to cult classic T-shirt slogans. Star Wars. The Princess Bride. Albert Einstein. Stan Lee. From such sources we’ve gathered (and moved thoughtful upon) the deepest, purest, most profound ideas and sayings to be found. The ones that cut right to the heart of life in the twenty-first century. The ones we quote as if they’ve come from the Bible, or from Shakespeare. The ones that, increasingly, have emerged from the underground to form the cellular structure of a true culture cannon.

Our culture canon. And thus does the geek inherit the earth."

Geek Wisdom. It definitely defines a large part of my life. Segal’s book highlights some of the best building blocks of that culture. That foundation is part of the reason more than 5,000 people gathered in Chicago for Chicon 7. It’s who we are and what we did this past weekend—build upon what has come before and stretch beyond comfortable boundaries to create anew.

After coming home and crashing, after laundry and unpacking, I am going to write tonight. I have so many stories. I can’t wait to share them with you, and I want to see what you come up with as well. I want to talk with you, because we have a common nerd culture, we have a history, and I look forward to our future.

Until we meet again.

Spending time with friends at Chicon (with Madeline Matz and Gene Wolfe). Photo by Teri Goulding